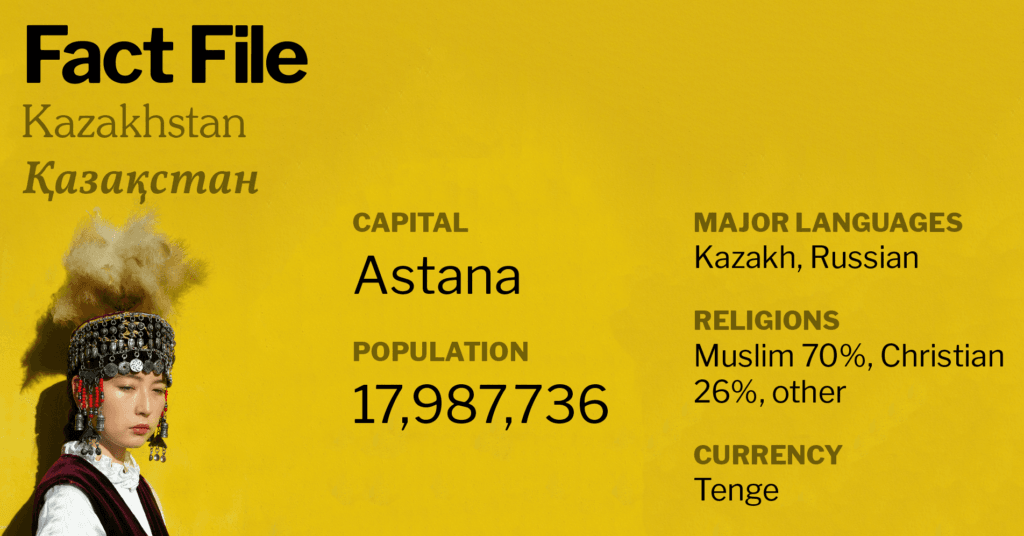 As the largest, richest and most well-known of the Central Asian nations, Kazakhstan is often referred to as ‘land of the wanderers’.

From the icy-climate of Kazakhstan’s industrialised north to the oil-rich lowlands of the country’s western frontier, the country’s geographic diversity has been a blessing and a curse. The country’s enormous mineral wealth, despite the challenges presented by its vastness, have helped to off-set some of the pains of a post-Soviet integration into the global economy. Greater ties to the US and China have followed investment in the oil-economy.

The national flag of Kazakhstan, chosen in 1992 after the collapse of the Soviet Union, was designed by Kazakh artist Shaken Niyazbekov. It depicts a golden sun shining above a golden steppe eagle in full flight. The steppe eagle is an important cultural symbol for the Kazakh people. It is a migratory species, but breeds on the central Kazakh plains. As for many nations, it represents freedom, strength and dignity. Both symbols are placed on a sky-blue background, a colour central to Ancient Turkic religious belief. On the hoist-side, a ‘koshkar-muiz’ (the horns of the ram), a traditional ornamental patter, is presented.

With just under 18 million people, comprised of 131 ethnic groups, spread out over a million square miles (making Kazakhstan the largest landlocked country) — Kazakhstan understandably has a remarkably diverse cultural composition. Despite a brief interlude of state atheism under the Soviet Union — Islam has remained the dominant religion in Kazakhstan since the eight century AD. Islam, however, is one of many tenets that comprise a Kazakh cultural history rooted both in its position as a global crossroads, and the distinctly nomadic and pastoral quality of historic Kazakh life. As such, while globalised sports, such as football, are popular (the Kazakh football team came twenty-second at the 2016 Rio Olympics, narrowly beaten by Uzbekistan), traditional nomadic sports — typically equine based — remain alive in Kazakh society. One such game, Kyz kuu, (chase the girl) is an elaborate game of kiss chase on horseback.

Kazakh cuisine often reflects nomadic traditions centered around the rearing of livestock; with meat and dairy acting as the lynchpin of typical dishes. Variations on pilaf (plov) are popular in Kazakh meals, and are usually accompanied by soups and various appetisers. Fermented mare’s milk is a popular alcoholic beverage — the Central Asian Forum makes no judgement as to its taste

Kazakhstan operates as a bicameral unitary republic – with the president Nursultan Nazarbayev as the head of state. The president is required to renew their mandate through national elections every five years. Whether by charm, luck, skill or otherwise, Nazarbayev — the former Soviet première of Kazakhstan – has won each election since independence with over 90% of the vote. Nazarbayev’s Otan party currently hold a majority of seats in both houses.

As the economic powerhouse of the Central Asian region, Kazakhstan carries significantly more economic clout in the international scene than her neighbour stans. Economic growth has been driven primarily by exports of minerals and fossil fuels. However, efforts have been made post-independence to break Kazakhstan’s reliance on external demand for raw materials by diversifying their economic activity. One such effort has been the Nurly Zhol ‘path to the future’ policy, which has sought vastly increased infrastructure spending so as to foster economic rigidty in the face of changing global circumstances. Kazakhstan 2050 is an economic development project announced in the 2012 annual presidential address — it is a multifaceted programme which seeks to establish Kazakhstan amongst the world’s ’top-30’ economies by 2050, it follows on from a similar Kazakhstan 2030 scheme.